Ailbhe Goodbody was invited by Atlas Copco – now increasingly known as Epiroc – on an exclusive visit to Anglo American Platinum’s Twickenham platinum mine in South Africa in September to see the Atlas Copco Mobile Miner 22H, which is undergoing production trials there.

Atlas Copco’s mining unit is in the midst of changing its name to Epiroc, in preparation for a split from the parent company mid-2018. This article will therefore refer to both Epiroc and Atlas Copco.

A few months later, in November 2017, the company announced that it had received the first order of its Mobile Miner 40V from Hecla Mining. This machine will be heading to Hecla’s Lucky Friday mine in Idaho, US; no delivery date for the order was released, but Mikael Ramström, global strategic projects and alliances at Epiroc, commented that it was hopefully the first in a series of Mobile Miners being ordered by Hecla.

These milestones have occurred after many years of research and development by Epiroc into the product line, using design elements from the original Robbins Mobile Miner. 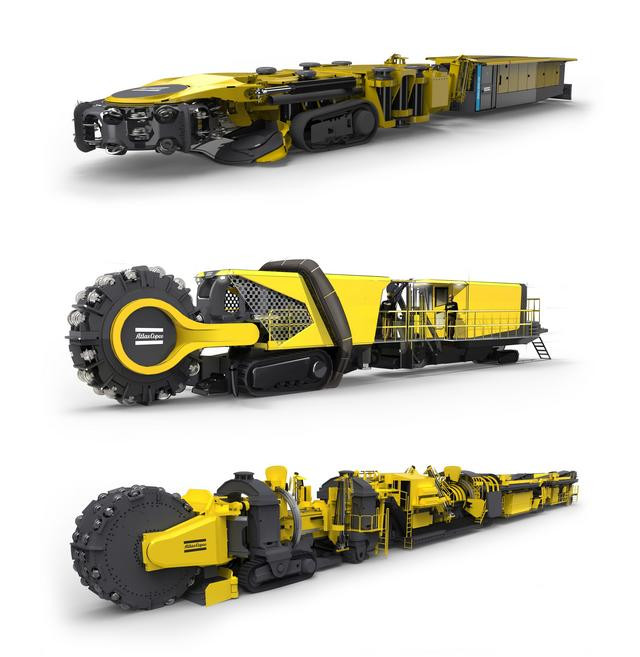 At one point Rio Tinto was involved in the development of the Mobile Miners; the company ordered Epiroc’s first new generation Mobile Miner, the Mobile Miner 55V, in 2009. As part of the design criteria, Rio Tinto asked for a machine capable of cutting a variety of horizontal tunnels, tight curves and cross-cuts, a self-propelled unit capable of handling very high in-situ rock stress, with the highest possible safety standards.

The Kennecott Utah Copper Bingham Canyon mine in Utah, US, was intended to be its trial site in 2013. However, the mine site never commissioned the machine due to a major landslide that took place there in April that year. Ramström says: “The machine was then sold to a Swedish contractor who is now looking at other projects to put the machine to use.”

Anglo American also approached Epiroc about its hard-rock cutting technology in 2012. This resulted in the Rapid Mine Development System (RMDS), which Epiroc developed with Anglo American under the name Mobile Miner 22H. It is based on traditional tunnel-boring machine (TBM) technology and aims to secure rapid access to an orebody and safely develop infrastructural mine tunnels for mechanised mining in hard rock.

“In developing its hard-rock cutting strategy, Anglo American sought out industry partners that were established leaders in their field,” says Roland Berndt, head of transformative technology – mining at Anglo American. “Atlas Copco has a long and successful history of supplying equipment and solutions to the hard-rock mining sector, and had particular skills and expertise in machine design for this environment.”

Its development is now part of Anglo American’s FutureSmart programme, which it established in 2014. The mining company states that this programme, which currently has 50 different initiatives underway, “applies cutting-edge technological advances and broad innovative thinking to address mining’s major challenges. Through collaborative partnerships, [the company is] connecting people to find safer, more efficient and more sustainable ways to mine the precious metals and minerals that [its] customers need.”

There is potential risk for companies that are among the first to try a new mining technology. However, Berndt says: “Anglo American believes that the mining industry is on the cusp of a technological revolution, not unlike that which is happening in many other industries – and that companies that choose to proactively break new ground, even though this has risks, will be the ones that gain disproportionately from this disruption. As always, there has to be a balance between opportunity, cost and risk, with not all ones eggs in one basket.”

The Mobile Miner 22H is designed to quickly, cost-efficiently and safely develop low-profile tunnels in hard rock. The machine itself is 24m in length, 2m high and 4.2m wide; it is optimised for the excavation of low-seam veins or producing tunnels with a profile 2.2-3m in height and up to 5.7m in width. It is a 1,000V machine and can connect to whatever power source the customer wants; in Twickenham, it is connected to the mine’s main power.

Ramström says: “Both Epiroc and our partners see at least 50% potential increase in overall productivity when compared to drilling and blasting in applications where the Mobile Miner will cut rock/ore. We expect to demonstrate this together with our partners in the near future.” 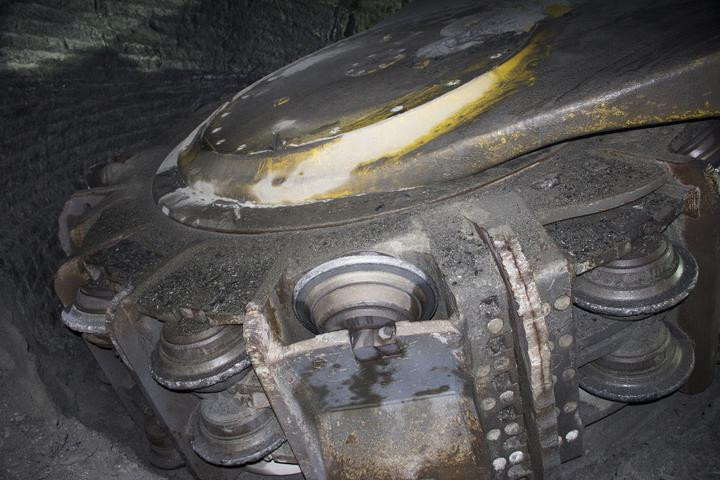 A close up of the Mobile Miner 22H cutter head

The disc cutters have the potential to cost-effectively cut abrasive rocks with a uniaxial compressive strength (UCS) of up to 250MPa – the rock is between 150-250MPa at Twickenham. In contrast to the round tunnels drilled by conventional TBMs, the tunnel that the Mobile Miner excavates is rectangular in shape; this is important for roof stability, and it also provides the flat floor needed by mine vehicles. It is capable of advance rates of 10-12m per day depending on the rock type.

Another big advantage is its mobility and manoeuvrability as it excavates a tunnel that is bigger than itself. Johnny Lyly, global product manager for raise boring and the Mobile Miner at Epiroc, says: “The beauty of the Mobile Miner compared to a TBM is that it makes a tunnel much bigger than the machine, so it can manoeuvre and turn, not just reverse.”

The Mobile Miner 22H is designed for remote operation in the same way as other Epiroc products such as the Simba or Pit Viper drill rigs. It can also be equipped with roof bolting and mesh handling add-ons for rock support during operation. The machine in the Twickenham mine has two full-time operators – one to operate the cutter head and one to operate the bolter – and does not currently have remote operation applied.

The main operator cabin relies on screens and four cameras to control the cutter head, and includes Epiroc’s Rig Control System (RCS). For example, the cutting screen displays data such as the temperature, how much water has gone in and out, pressure, lubrication, and litres per minute, as well as how far the machine has advanced. It also shows a small version of the sophisticated drill plan so the operator does not have to keep changing screens.

Burger Lategan, who was operating the machine on the day of MM’s visit to Twickenham, comments that the cab is very modern and comfortable and includes features such as air conditioning.

All of the cutting information goes onto a USB and is logged at the end of each shift. It produces a vast amount of information, which can be used to generate graphs once it is on the network.

The machine in Twickenham has two bolters which can be operated at the same time, using 1x1m standard bolts. The operator of the rock bolter wears a portable controller for remote operation.

The machine also has dust filters that suck air from the cutter head and remove dust, so that minimal dust is produced around the equipment. This has benefits for visibility of the cutter head on the screens, as well as for anyone working behind the machine picking up the ore.

The ore is then removed to the rear of the machine via an integrated chain conveyor in the centre of the Mobile Miner 22H. Two star wheels at the front catch the cuttings and push them on the conveyor, where the material is conveyed to the back of the machine. Depending on production, the material can be removed from the back by a scoop, a truck or a conveyor – at Twickenham, an Atlas Copco Scooptram LHD was being used.

Part of the efficiency of the Mobile Miner range is that the machines are multi-functional. “The machine isn’t that big, and you can have one machine doing the whole tunnel,” says Lyly. “There is no need for other equipment such as shotcreters, bolters or muckers.” The ore excavation time is also greater as there is no time lost during blasting.

Safety is another big benefit of the Mobile Miner range. As well as removing people from areas of most danger underground, they produce no underbreak and almost no overbreak, thereby reducing the risk of collapse.

The opening part of the tunnel at Twickenham where the Mobile Miner 22H was in operation during MM’s visit had been blasted before the machine arrived. The blasted section of the tunnel was noticeably more rough and uneven than the section where the Mobile Miner 22H had taken over. “The contracts were signed in 2012,” says Hein Zimmermann, technical support projects at Epiroc. “Since then there have been no accidents – no lost time incidents, no rock falls.”

Operator Anton Odendaal confirms that the machine has been working for a year but not one rock has come down. “Fall of rock is one of the biggest killers in mines,” he says.

Lyly says that Epiroc is very pleased with the results that are coming back from the machine in the Twickenham mine. “We are really proud of this machine,” he tells MM. “It won’t take over all drilling and blasting, as the penetration rate may not be competitive or economical in rock with a UCS of above 250MPa, but there is definitely a place for it.”

Zimmermann explains: “Technically it is still a trial, but a production trial. It simulates the conditions of full production.” The company plans to finish this 120m-long section of the tunnel by December, and the machine will be moved to another part of the mine in the same month to go into full production.

Meanwhile, Anglo American is also complimentary about the results of the collaboration. “Not only has Atlas Copco been able to bring its cutting technology, machine design and manufacturing capability to the partnership, it has been able to support those efforts from its South African operations base,” comments Berndt. “Particularly in the on-site testing and proving stage which we are now busy with, this local support is a very important part of achieving a successful project outcome.” 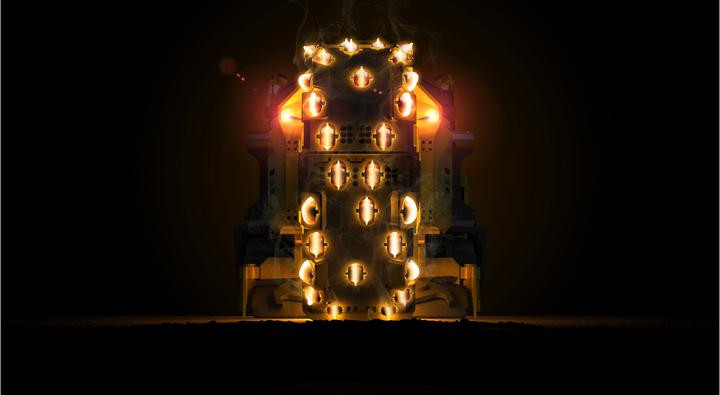