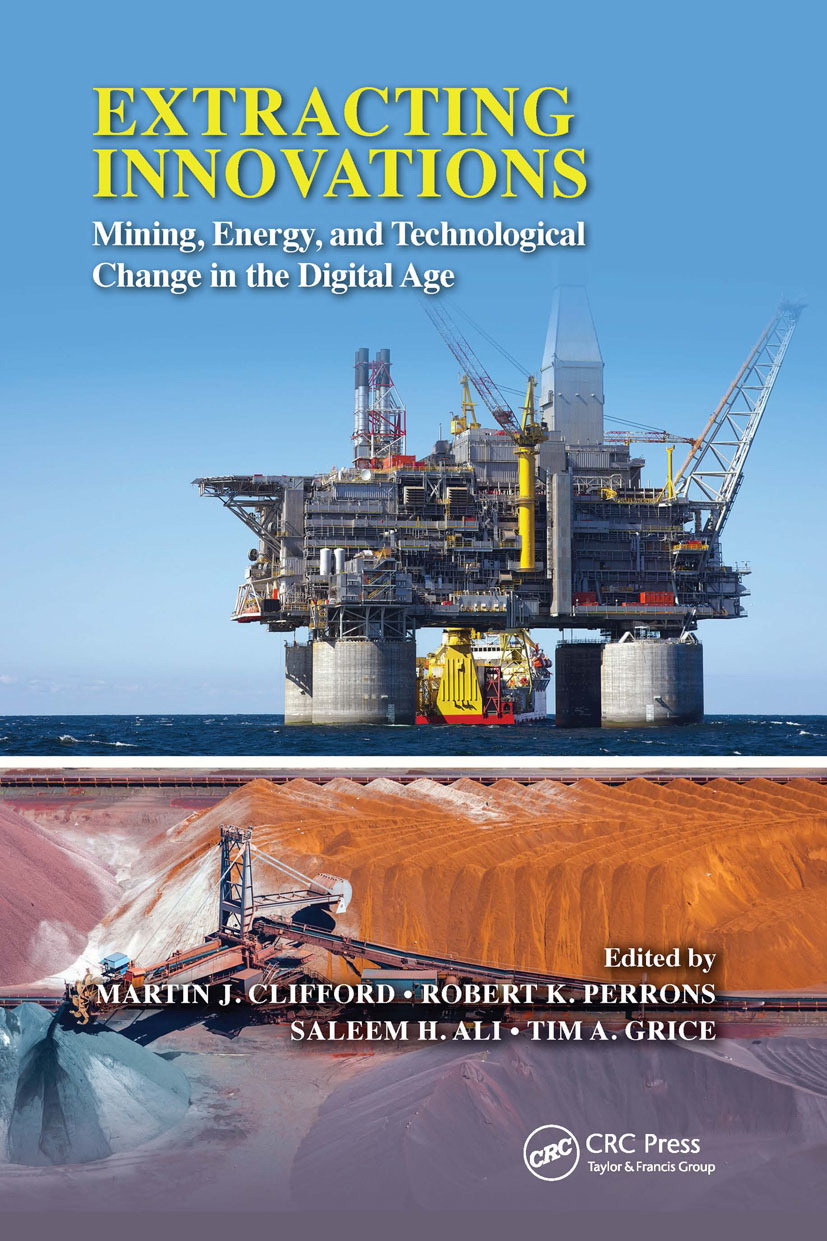 This book considers the most contemporary innovations propelling the extractive industries forward while also creating new environmental and social challenges. The socio-ecological fabric of innovation in the extractive industries is considered through an integrative approach that brings together engineers, natural scientists, and social scientists—academics and practitioners—giving an empirically grounded and realistic evaluation of the innovations in this sector. It synthesizes a series of questions including:

Section I: Processes and Organizational Design Underpinning Innovation in the Resources Sector.

Martin J. Clifford is a postdoctoral researcher in Energy and Environmental Policy at the Department of Geography, University of Delaware, Newark, Delaware. His work focuses on the socioeconomic and environmental dynamics of large and smallscale extractive industries, particularly in lower income countries. Much of his empirical work in this regard took place in Ghana and Guyana. This ties into his broader interests in international development and sustainable natural resource  anagement.
Much of his recent scholarship has focused on the Minamata Convention on mercury reduction and its
impact on the gold mining sector. He has also completed a study on pathways for socioecological resilience in small-island developing states with extractive resources, focusing on the island nation of Nauru. This work was supported by the Pavetta Foundation. He earned a PhD and MSc in International Development from the University of Reading, Reading, England and the University of Manchester, Manchester, England, respectively.

Prior to joining the Queensland University of Technology (QUT) in Australia as an associate professor in 2011, Robert K. Perrons worked in a wide variety of roles and locations for Shell International’s Exploration and Production division. He started his career in Shell’s Strategy and Economics team in 1997, and then worked for several years as a production engineer in the company’s overseas operations (offshore and onshore). He left Shell for 3 years to work as an Industrial Research Fellow at the University of Cambridge in the United Kingdom, and then rejoined Shell again in 2004 to become the company’s Executive Coordinator of Research and Development. He earned a Bachelor of Engineering in mechanical engineering from McMaster University in Canada, a Master’s degree in Technology and Policy from the Massachusetts Institute of Technology (MIT), and a PhD in engineering from the University of Cambridge, where he was a Gates Cambridge Scholar. He is a Fellow of the UK’s Institution of Mechanical Engineers (IMechE) and Engineers Australia, and is chartered as a professional engineer (Eur. Ing.) in Europe. He continues to stay connected to the University of Cambridge as
an Affiliated Researcher, and is an adviser to MIT’s Mining, Oil and Gas Club. In addition to his QUT position, Dr. Perrons serves the Australian government on an ad hoc basis as a member of their “Expert Network.” His
duties in this role include providing advice about the energy industry and emerging innovations in that sector, with the overarching objective of accelerating the commercialization of promising new energy technologies.

Saleem H. Ali holds the Blue and Gold Distinguished Professorship in Energy and the Environment at the University of Delaware, Newark, Delaware where he also directs the Gemstones and Sustainable Development Knowledge Hub, supported by the Tiffany & Co. Foundation. He is also a Senior Fellow at Columbia University’s Center on Sustainable Investment. Professor Ali has held the Chair in Sustainable Resources Development at the University of Queensland’s Sustainable Minerals Institute in Brisbane, Australia (where he retains professorial affiliation). His books include Treasures of the Earth: Need, Greed and a Sustainable Future (Yale University Press); Environmental Diplomacy (with Lawrence Susskind, Oxford University Press) and Mining, the Environment and Indigenous Development Conflicts (University of Arizona Press). Corporate and government experience includes employment in General Electric’s Technical Leadership Program; a Baker Foundation
Fellowship at Harvard Business School and a Research Internship at the UK House of Commons. He is a member of the United Nations International Resource Panel, was chosen as a Young Global Leader by the World Economic Forum in 2011, and received an Emerging Explorer award from the National Geographic Society in 2010. He earned his doctorate in Environmental Planning from Massachusetts Institute of Technology (MIT), Cambridge, Massachusetts; a Master’s degree in Environmental Studies from Yale University, New Haven, Connecticut; and a Bachelor’s degree in Chemistry from Tufts University, Boston, Massachusetts (summa cum laude).

Tim A. Grice is an honorary senior research fellow at The University of Queensland’s Centre for Social Responsibility in Mining and the Founding Director of Leapfrog International. Grice’s academic and applied work focuses on extractive governance and inclusive development in Asia–Pacific, Africa, and Latin America. Dr. Grice has led resource governance projects for The World Bank, The International Finance Corporation, The United Nations Development Programme, Extractive Industries Transparency Initiative, Transparency International, The Natural Resource Governance Institute, and the Australian Department of Foreign Affairs and Trade. Dr. Grice earned a PhD from the University of Queensland, and is a member of Transparency International and the World Future Society.